Recently, I have been enthralled with the work of Dyson Logos. Over the last several weeks I have been watching as Dyson posted map after map of beautifully drawn maps. Being a fan of sketching, I was drawn naturally to the allure of gaming cartography. I had one problem, I just needed to sit down and make something.

Last Friday, I was a player in the Dungeons and Dragons (5e for those interested) game, so I didn’t create the map. I took some photos of the table as we were nearing completion of the evening as well as drew a small sketch of the map near me on the table with some numbers so I could remember the story points. You can find my entire write-up including my final maps here.

I did some research on Dysonizing Dungeons, and while I had been playing with my own versions of Dyson’s advanced style with small sketches of maps, I decided to leave that for the future.

I started by sketching out each of the rooms, counting out each of the components to come close or match the original design of the dungeon as closely as possible. I did not realize how large the map was. It did not fit on my paper at all. I should have scrapped it as soon as I realized this, but I was more interested in getting a final product (just make a map already). 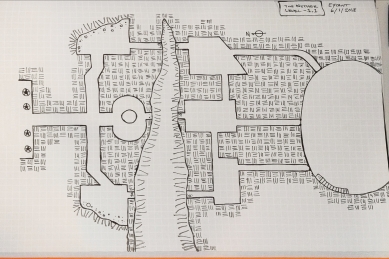 I think that by comparison, this is clearly a noob’s map, and the “cheat” style looks far inferior to the fully-fledged Dysonified maps. Overall, the experience was rewarding, and drawing all of those lines was quite relaxing.

I can’t wait ’till the next map I draw. Next time, I will plan my attack better and amp up the styling.

The opinions expressed are my own and not that of my company.

Opinions posted on this site are my own and not the views of my employer.